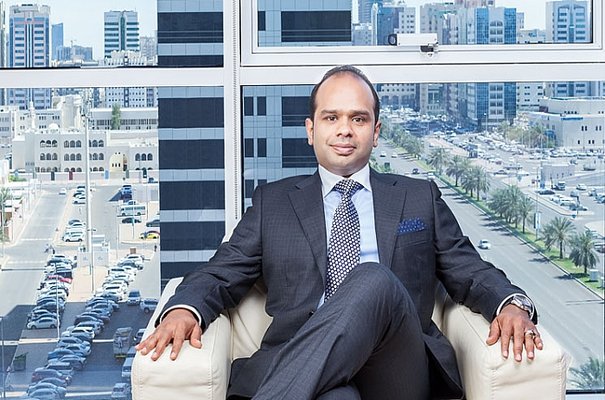 Adeeb Ahamed’s passion for food and hospitality has been life-long. Growing up around his father’s restaurant in India made him a popular kid, able to get a coveted seat at the crowded diner for his friends when others were left fighting for a spot. Fast forward a couple of decades and the 35-year-old CEO is in the process of transforming Great Scotland Yard, the former headquarters of the London Metropolitan Police, into the city’s newest five-star luxury hotel.

The journey has not been slow, but it has had some twists. While studying for his MBA in London, Adeeb followed his heart into hotels, working his way up in Grosvenor House and Marriott before eventually becoming director of sales for Italian firm Baglioni. However, when he and his wife were welcoming their first child in 2008 they headed back to the U.A.E. and to their family business, and Adeeb found himself unexpectedly entering the world of finance.

“I was asked to second a position as COO to a financial services group that was to be managed by a leading bank,” says Adeeb. “After a couple of meetings the bank found that they were not in sync with my way of moving things around, so they went to the Chairman and said he seems to have a better vision than us on how to move things forward—let him handle it and we’ll back you up. So the bank took a step back.”

With his previous experience purely in hospitality it was a risky move: “I had no clue how to run this line of business” Adeeb admits. “I told them it would be a bad choice, but they said give it a try.”

It was a risk that paid off. Once he’d recruited a trusted team he took the leap, and business boomed. Just six years later and the foreign exchange and remittance giant, Lulu Financial Group, now operates more than 125 branches with a staff of over 1,500 across nine countries, including India and the Philippines. For its next milestone the group is looking towards Hong Kong, Malaysia, Indonesia and Europe.

Not long after setting up the finance arm, another idea blossomed, this time the brainchild of Adeeb’s wife, Shafeena. The idea was to launch an innovative food and beverage concept specializing in championing homegrown produce and forming partnerships with international franchises to bring new cuisine to the area. Tablez Food Company was born in 2012 and now operates 30 outlets across the GCC and India. Adeeb sits on the company’s board as a director and has big plans for the operation: “We feel that in the next five to eight years we are looking at it becoming a $100 million business. Over the next few months, we will reveal details of the new brands that are being launched by Tablez Food Company. Three of them will be launched within the U.A.E. market.”

With this new venture kicking off Adeeb found he had the opportunity to rediscover his passion. Already a successful international retailer, financial service and now F&B franchiser, the Lulu Group was persuaded to look at hotels in this region and further afield to grow the ever-expanding business.

Twenty14 Holdings, the hospitality arm of the group, acquired its first property in Dubai in 2014 and appointed German Steigenberger Hotel Group to manage it. In the same year Twenty14 Holdings acquired 50% of the Sheraton in Oman and, of course, bought the Great Scotland Yard property.

By March 2016 the group had invested more than $650 million in acquisitions.

The new 156-key hotel could be Twenty14 Holding’s most impactful development in what many would call a prime location. For Londoners, Great Scotland Yard is not just an address; it’s an iconic piece of their history. For the developers and marketers the USP is ingrained in the name. Surprisingly not every company pitching for the contract recognised this, with some insisting that they would need the hotel named after their brand. Adeeb fought them off, saying simply “that’s not an option”.

With developer Galliard Homes now on board, the building’s transformation is underway, and while the property won’t be themed it will have well-thought-out nods to its history, such as a library named after the first head of the metropolitan office, and other areas honoring prominent former residents.

Despite setting Twenty14 Holdings up in a slow market, Adeeb is confident that growth will continue both in the region and beyond. “We entered at a tough time in the market, but so did all my other businesses. Whenever we end up creating a business line, for some odd reason we always open up during very bad times. I feel that’s good though because there’s only one way that the graph can go, and that’s up.”

His confidence is not misplaced. Anthony Lawrence, Managing Director for the Middle East at Latitude says that although markets may be slow demand is still growing in Dubai in particular. “There is still an increasing demand on rooms in the emirate. If just 5% of travelers passing through Dubai stop off for a few days in transit then supply would be instantly exceeded,” he says. “The biggest challenge right now is the luxury sector that is hit by a slowdown in Russian and Chinese markets and a strengthening US Dollar.”

Adeeb believes that one important factor driving up demand is the power of aspiration. As incomes rise across the globe and people become more affluent, the demand for four and five star hotels is still building in many areas. Especially in London where the threat of oversupply is significantly lower. Whereas Dubai is looking at thousands more rooms entering the market every year, in the already-crowded London market that number is in the hundreds. Twenty14 Holdings is now looking at acquiring more properties both in the Middle East and Europe, with Paris being a potential spot for the next investment.

Within the company the MD imbeds a culture of responsibility and ownership, something Adeeb learnt to be vital in his dad’s restaurant: “My dad once said to me, I’m going to give you the most important job and I thought good—my job should be to monitor what everyone else is doing—and he said no, your job is to clean the baking trays. I said how is that the most important job? He said because if the tray isn’t clean it doesn’t go into the oven, the baking doesn’t happen, the product doesn’t come, and you don’t sell anything. So I learnt the importance of being everywhere and understood that teamwork is the only way that you can get people engaged.”

His team is small, but talent is cultivated by each member being completely responsible for each project. Adeeb sees himself as an angel investor—if a member of his team comes to him with a good proposal, he agrees to invest, and from that point the project becomes the team member’s baby, with failure supported and learnt from, and success warmly celebrated and rewarded. “We get them engaged” Adeeb explains. “My focus is getting the talent and nurturing them, getting them to the next level. Everyone in the company should be looking for the next rung up, and that pushes the company to new heights. It’s thanks to this that we have a well-equipped and strong engine built up today.”

Lulu Group International, which operates in 31 countries, currently has an annual turnover of more than $5.4 billion. The strong family element is a big part of its success and reputation. Adeeb certainly feels an obligation to respect the work of previous generations and to build something more for the next: “We are lucky in that we have a football pitch to play on; you just need to be a good player” he says. “Now we have a burden on us to give the right thought processes to the next generation. My father and my grandfather, they lived the tough life. We work hard, but we already have a base to play around on. By the time my son’s generation comes of age they will have twice as big a base, and they will need the same passion to build further.”

It’s a never-ending quest for growth that is every year reaching new parts of the globe, and it’s something that Lulu knows how to do well. The challenge comes with surviving the dips and keeping momentum moving forward. Adeeb admits that “hitting the target is the easy bit; staying there is the hard part”, and having continuously hit his targets at a young age, he has a longer path ahead of him in which to keep the energy flowing.

It doesn’t appear to be something that will prove too hard for the MD. He and Shafeena are already looking at diversifying their interests by foraying into apparel business. This could later be merged with the group’s F&B entity, the ever-enterprising Adeeb says.

And of course there is the growing hospitality arm. As London prepares to welcome a truly unique hotel, Adeeb is already in talks for the next big property purchase. And if his current portfolio is anything to go by, we should expect something spectacular.