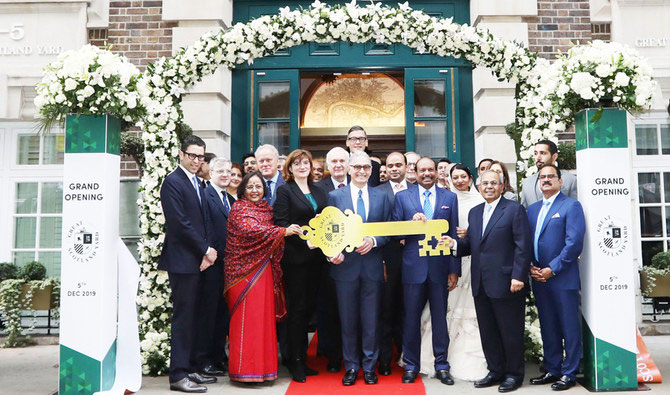 Twenty14 Holdings, the hospitality investment arm of UAE’s LuLu Group International, has completed investments of 1.43 billion dirhams ($389.4 million) in the UK, with the inauguration of the Great Scotland Yard in London. The hotel opened for business on Dec. 9.

The Great Scotland Yard Hotel, which is being managed by Hyatt under their The Unbound Collection by Hyatt brand, is located in the St. James’s district of Westminster.

Steeped in history, the Great Scotland Yard was once a dwelling for visiting kings of Scotland during the Tudor period, while today the building is most famous as the former headquarters of the London Metropolitan Police force. In 1910, the building served as the British Army Recruitment Office and Royal Military Police headquarters.

LuLu chairman Ali said: “London is one of the world’s greatest cities and the Great Scotland Yard Hotel represents its illustrious past as well as its modern significance. The hotel spotlights the city’s vibrant history, its several celebrated aspects and its status as a global melting pot. In essence, we have curated an unmatched experience for every guest while recreating the historic premises into a symbol of ultimate hospitality.”

Adeeb Ahamed, managing director, Twenty14 Holdings, said “The Great Scotland Yard Hotel is a dream come true for us, the culmination of a path set long ago, transforming one of the world’s most historic addresses into an icon of modern hospitality. Twenty14 Holdings’ focus remained steady right through, keeping the building’s reputation in mind, every effort made in its rebirth had to be extraordinary, beyond expectations. And, this is what has been accomplished. The Great Scotland Yard Hotel invites you to experience its myriad stories.”

The hotel offers multiple F&B options — The Yard, The Forty Elephants, The Parlour and Sibín — serving international and British modern food under the supervision of acclaimed chef and restaurateur Robin Gill.